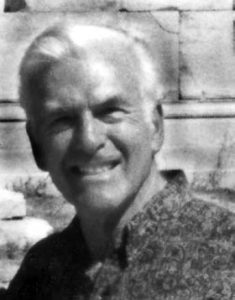 Burt received B.S. and Ph.D. degrees in Economic Geology from the University of California at Berkleley in 1947 and 1953. He began teaching geology at the University of Nevada, Reno in 1951 and retired in 1989. He was a major influence on earth science education at UNR, serving for several years as Geology Department Chairman. He was instrumental in starting several programs, including the Seismological Laboratory and the Center for Neotectonic Studies.

Burt has worked and published articles in several fields, including volcanic geology, structural geology, atmospheric science and mineralogy. However, he is best known for his work in active tectonism. He published important research on order-disorder relations in plagioclase as a GSA Special Publication in 1962. He has authored more than 20 journal articles and has produced a large number of contract reports, mostly on active tectonics research. He has also published maps and articles for the U.S. Geological Survey and several state surveys, and has published in numerous symposium proceedings.

Burt was one of the most productive workers in funded research in the MacKay School of Mines, supporting many graduate students while providing geologic expertise for pipeline, fossil fuel plant, and mining facility geologic engineering projects. He has also been active in earthquake hazard studies.

Burt is an internationally known scientist who has served on the Board of Directors for the Seismological Society of America and has been GSA Cordilleran Section Chairman, GSA Associate Editor, and GSA Geophysics Division Chairman. He has been a program director for NSF and has served on professional panels and boards.

In 1957, Burt was a founding member of GSN along with Dick Larson, Lon McGirk, Larry Beal, Bob Rose, and Bill Johnston (GSN Honorary Member). GSN was originally formed, mainly by MacKay School of Mines personnel, to serve as a forum for geologic lectures (the school had no geologic lecture series at the time) and to provide for closer ties between the school and industry. Burt was the first GSN Vice-President. He regularly attended GSN meetings in Reno from 1957 and 1989.